5 Places in Yucatan That You Should Add to Your List

You are here:
Tourism 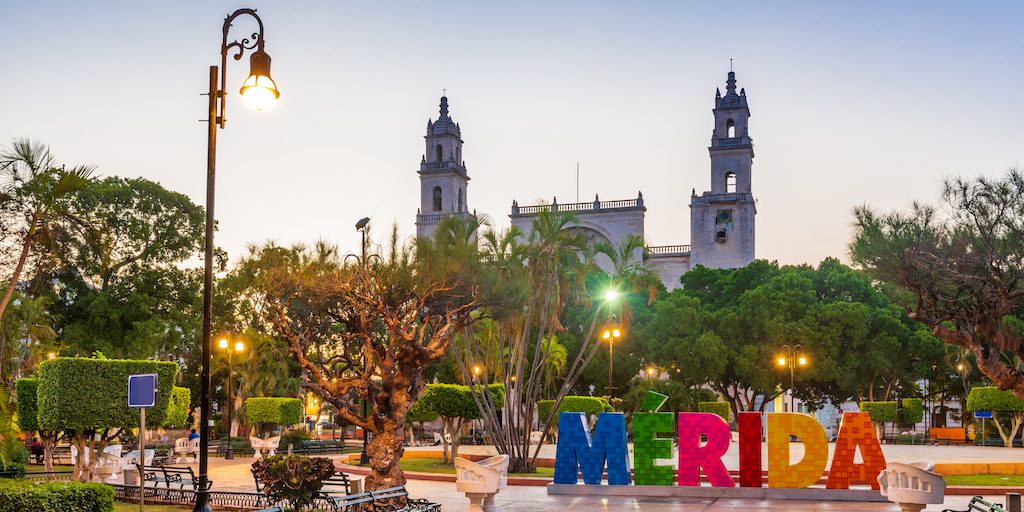 If you’ve never been to the Yucatan you might not realize all the treasures that exist in the surrounding towns and hidden in the jungles and just how easy it is to get to this destination.  Read on to find 5 places in the Mexican Yucatan that you should add to your list when you visit.

When you fly into the Yucatan, you’ll want to look for Manuel Crescencio Rejon International Airport, also known as Merida Rejon Airport (MID). Flying direct from the United States is as easy as hopping on Aeromexico, United, American Airlines, and Volaris. Experience Yucatan’s “biosecurity bubble” in Merida’s international airport with free rapid antigen test and no appointment necessary.

Avoid changing planes or layovers when you book direct flights from Houston, Oakland, Miami, and Toronto.

With year-round warm weather and a melting pot with influences from the Mayan population as well as the Dutch, Spanish, French, British, and even Lebanese, you’ll need at least a few days to explore.  It’s known as the cultural ex-pat mecca.

Merida, Mexico is beginning its transformation of the Historical Center to convert streets in the pedestrian areas to the style of the European city trends. The Plaza Grande’s surroundings will be free of vehicles so people can stroll without excessive noise to enjoy the Cathedrals, The Government Palace, Colorful streets, and mansions.

Explore Merida with a horse and carriage ride near Plaza Grande at the corner of Calle 60 & 61 or hop on board the iconic double-decker Turibus which circles Merida’s historic sites.

Whether you travel for food or not, you could eat your way through this colonial city.  Discover Italian, Asian, Seafood, Lebanese, French, and Mexican restaurants or Mercado 60, a gourmet market providing a unique market dining experience.

A well known Yucatan taco called Cochinita pibil is pork marinated in a citrus juice with achiote paste then wrapped in banana leaves and roasted in a Mayan pit underground. These smoky-sweet tacos are then topped with a bright tang of pickled onions. It’s common to have Sunday gatherings and eat cochinitas.

Yucatan’s trademark dishes include chicken or pork with the meat marinated in different juices and spices.  Mayans are known for achiote, citrus, habaneros, and smoke. Taste a hint of these in every nook and cranny of their cuisine.

With over 7012 Yucatan peninsula restaurants rated by Tripadvisor travelers, your choice is from cheap eats to local cuisine and fine dining.

What is the Closest Beach to Merida, Mexico?

30-40 minutes away Progreso Beach offers sand, Pina Coladas, and the ocean.  It’s not touted as the most beautiful beach since it’s located in a cruise port but it’s got plenty of food options and the sand to sink your toes into.  Jutting into the Gulf of Mexico, approximately 4 miles long or a 90-minute walk from the start to end, the Progreso Pier keeps boats at a distance from the beachgoers.  The water still boasts that turquoise-green hue and attracts many species of birds.

Accommodations in the Yucatan can vary greatly.  If you google images for Yucatan haciendas you’ll be captivated by the luxurious estates incorporating nature and luxury with the cultural history of the Yucatan peninsula. These hidden gems are scattered throughout the peninsula.  When you stumble upon them, instantly you’re taken back 150 years into Mexico’s colonial past. The old mansions and factories have been turned into hotels with a romantic flair showcasing many of Mexico’s agricultural riches. Massive cattle ranches now are major henequen manufacturers that grow fiber. Envision candlelit private gardens, uniquely carved columns, cenotes within the Hacienda, and coral walls in the tropical rainforest.  It’s this blissful experience that takes you to a different world where ancient architecture is preserved.

Cenotes are natural sinkholes that formed from the collapse of limestone. Subterranean clear pools filled with turquoise and green crystalline water connect underground rivers that offer otherworldly pools of fresh water. Many of these cenotes are located near temple sites which provided a water source for the Mayans.

They all have their own characteristics ranging from open-air to cave-like to others being surrounded by sheer rock and foliage dangling down to the water.  Surrounded by jungles, these cenotes attract snorkelers, scuba divers, and families just wanting to wade in them.

How Were Cenotes Formed?

The powerful asteroid impact 66 million years ago left behind the Chicxulub crater and Ring of Cenotes. This crater is one of the largest impact areas on earth and very well hidden under limestone. You can drive to some but others require a carriage ride to access them.

Why Were Cenotes Important to Mayans?

Cenotes (pronounced say-NO-tays) are believed to be sacred spots for the Mayans to communicate with the gods and higher beings. They saw this as a passageway to the underworld.  Aside from spiritual reasons, Mayans relied upon this primary water source since lakes and rivers are sparse in the region.

Wikipedia touts over 6000 cenotes in the Yucatan Peninsula of Mexico. Even then they suspect there is more to discover. Your only decision is which one should you visit because you could spend a lifetime exploring them.

About an hour away from Merida, Izamal is known as the Yellow City with an impressive monastery and cobblestone streets.  Horse-drawn carriages take visitors throughout the city.  You know you’ve reached Izamal when you see the mustard yellow color on every building on every street.

The Spanish town was founded in 1550 and is a popular stopping point on the way to Chichen Itza. Explore a few small Mayan ruins located in the middle of the town. Climb them for some added excitement.

Located 75 miles east-southeast from Merida occupying about 4 square miles is the city of Chichen Itza. In 1988 it was designated as a World Heritage site and follows the name El Castillo (The Castle)”.  Walking around you’ll come across densely clustered ruins with a variety of architectural stone buildings.  Columns in the Temple of a Thousand Warriors, The Grand Ballcourt structures, the Temple of Kukulcan, the Sacred Cenote, the Osario Pyramid with the staircase, and the observatory temple called (El Caracol).  The Temple of Kukulcan has a step pyramid that stands approximately 181 feet at the base including the temple.  Ironically a hidden temple is buried below the current one.  Mayans are known to build on top of existing temples and architecture.

Is Chichen Itza Mayan or Aztec?

Chichen Itza was built by the Mayan people of the Terminal Classic Period.  One of the legendary traditions of Chichen was the Cult of the Cenote.  Evidence suggests Mayans performed a human sacrifice to the rain gods into this cenote offering valuable gold and jade ornaments.

Why is Chichen Itza a Wonder?

It’s no wonder it was voted as one of the “New 7 Wonders of the World” because it’s one of the largest and best-preserved archaeological sites in the world. Although you can’t climb the pyramid, you’ll be impressed with this sacred site.

Now that you’ve learned about Merida, Cenotes, Yucatan Haciendas, Chichen Itza, and Izamal, when are you planning your visit?  In 2020 Yucatan’s tourism board agreed to launch some new Mayan village programs led by local guides that would introduce visitors to some of these well-known sites.

Since Merida is marked as the second safest city in the Americas it draws tourism and industrial parks with the proximity of the port.  The  Yucatan primes itself for more visitors.

Learn more about living and investing in the Yucatan at www.simcarealestate.com

We’d love to hear your comments below!